After months of teasing, the wait is over: Chad Hurley and Steve Chen, who brought us the video-sharing site YouTube, are taking the wraps off their newest project, a video creation app called MixBit.

Versions for Apple mobile devices and the Web will be going live on Thursday, and an Android version is due in several weeks.

On the surface, MixBit resembles two other leading video apps, Twitter’s Vine and Facebook’s Instagram. As with those apps, users press and hold the screen of their smartphone to record video. Instagram users can capture up to 15 seconds of video, a bit longer than Vine’s six-second maximum. MixBit allows 16 seconds.

But as the name suggests, MixBit is all about mixing and editing video. Both the app and a related Web site,MixBit.com, are aimed at making it easy to clip and stitch together snippets of video. Simple tools built into the app allow users to edit each 16-second clip and combine up to 256 clips into an hourlong video. The final product can then be shared on Twitter, Facebook, Google Plus or the MixBit Web site.

Think of it as “shoot, mix, share.” You don’t even have to do the shooting — the MixBit site allows anyone to snip and remix any publicly shared video content.

In fact, Mr. Hurley said, encouraging users to remix other people’s videos to create new works is the principal goal of the service, which is the first big product to emerge from Avos Systems, the start-up he co-founded with Mr. Chen two years ago. (The company has received funding from the venture arm of Google, which bought YouTube, as well as from Innovation Works, Madrone Capital and New Enterprise Associates.)

“The whole purpose of MixBit is to reuse the content within the system,” Mr. Hurley said in an interview. “I really want to focus on great stories that people can tell.” 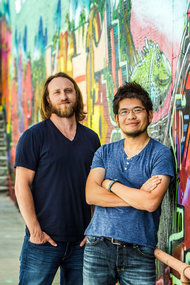 Chad Hurley, left, and Steve Chen were co-founders of YouTube.

The ability to create those more complex video stories could give MixBit an edge, at least momentarily, over Vine and Instagram, which are growing rapidly. Vine has no editing tools and Instagramintroduced rudimentary ones on Wednesday.

In a recent interview, Laura Krajecki, chief consumer officer of the advertising company Starcom MediaVest Group, said that neither Twitter nor Vine were quite fulfilling the desire of young consumers around the world to play around with video, mixing and mashing their own work with that of others.

“Create an app that lets people edit it, and that’s where people are going to go,” she said, speaking generally of the market opportunity and not about MixBit in particular.

But one crucial decision by Avos is likely to hold it back: the app is totally anonymous and communal. Users cannot post their videos under a name, and they cannot comment on each other’s work.

Showing off is a big part of modern Internet culture. The competition to create popular videos helped build YouTube into the powerful force that it now is, and it propels social networks like Facebook and Twitter.

“Everyone wants to be recognized,” Mr. Hurley acknowledged. He said MixBit would add identity features at some point.

But for now, it’s all about sharing, commune-style.

“We wanted to do that to first build a community within MixBit,” he said. “To see how that unfolds will be pretty interesting.”